Don’t miss entering the drawing for my book giveaway for {Why} Motherhood Matters by September McCarthy. See below!

Two large earthquakes within two weeks recently shook Mexico–8.1 magnitude in Southern Mexico and Guatemala, and 7.1 in Central Mexico near Mexico City. Amazingly, the 7.1 earthquake took place on the anniversary of another huge 8.0 earthquake that seriously damaged Mexico City 32 years ago. While I have been praying for those affected, many of them in deep poverty as it is, I started thinking about another earthquake in a story I just read to my children from the book of Acts. It’s a story of God’s guidance.

Paul and Silas considered journeying to Asia to preach the Word, but they were “forbidden by the Holy Spirit to speak the word in Asia” at that time (Acts 16:6). They were next trying to press on to Bithynia, but “the Spirit of Jesus did not permit them” (Acts 16:7), so they headed down to Troas. There, God gave them a vision that encouraged them to sail into Macedonia.

When God makes His directions clear, most of the time I find it easy to obey Him. He is to be trusted, so I don’t usually have a problem praying, Anything, God. It’s the discerning of His specific will that’s hard. In fact, I am waiting for His clear leading right now. I keep thinking that if He would just give me a vision or something else vivid, I would follow what He has to say. While I wait for His specific will, I do my best with His strength to obey His general will for my life: loving Him and loving others. I know that much. When it comes to specifics, though, at the moment I am standing in confusion, not sure which way to go. Paul and Silas were not in this position because God had made Himself very clear.

Acts records that these two men stayed many days in Macedonia, preaching the gospel to those who would listen. During this time, a slave-girl followed them day after day, crying out, “These men are bond-servants of the Most High God, who are proclaiming to you the way of salvation” (Acts 16:17). I have no idea why it took them so long to do something about this, but Paul suddenly had enough. Turning, he commanded a spirit of divination to come out of her, to which the spirit responded by promptly exiting.

The girl’s masters weren’t too happy about losing their reliable source of income, so they contrived to have Paul and Silas beaten and sent to prison. It was probably a gift at that point that God had been very clear that the two were to travel to Macedonia. They didn’t have to doubt: maybe we heard Him wrong? Maybe we were supposed to go to Bithynia instead? They had simply followed God’s leading; they preached the gospel and cast out demons in the place of His choosing. If they were to go through hardship because of it, God had a reason for it. They knew they could trust HIM.

Therefore, we find them praying and fervently singing hymns of praise in the prison when the great earthquake I previously mentioned occurred. This was no ordinary earthquake caused by a fault line. This earthquake miraculously broke every chain in the prison. This is where the story challenges me.

Maybe God clearly told them to stay–the narrative doesn’t reveal that to us. What if He didn’t, though? If I had been there, I know I would have taken that miraculous earthquake as a sign to escape. When I am trying to discern God’s plan for me, I tend to see signs everywhere. I think, maybe God is trying to tell me something through this! I’ve done this many times, and many times I have been wrong. If I had followed all my own signs, I would be a missionary in France right now. However, God has made it clear since then that He has other plans for my life.

I’m not saying God never uses signs to reveal His guidance for us. I am saying that we’d better be very sure, bathing every step in prayer, seeking wise counsel, and keeping our eyes and ears open to the Spirit.

Somehow Paul and Silas caught the Spirit’s message, and they and the other prisoners waited in their open cells. The result: a jailer’s life and soul were saved, along with his entire family. The next day, Paul and Silas were officially released, and as the officials then recognized they had treated them wrongfully, they were able to leave with dignity.

Discovering God’s specific plan for my life is sometimes quite difficult. I have been in tears over it, begging Him for guidance. However, if I have learned anything from this story in Acts, it is that I must listen and watch carefully, not grasping at the first supposed sign I see. I think I can also learn that God will make it clear to me if I’m patient enough to wait.

I would love some encouragement in this. Will you comment below with times when God guided you in your life in a specific area?

Photo by Lorenzo Bollettini on Unsplash 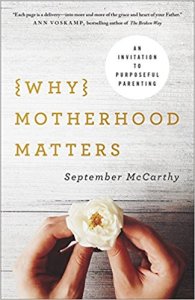 I’m in the middle of a book giveaway for {Why} Motherhood Matters by September McCarthy, which you can enter by subscribing to my blog:

To earn more entries, or if you’re already following my blog,

Giveaways are open to residents of the continental U.S. and Canada only.

I will announce the winner on Saturday, September 23 when September McCarthy will guest post for me, so look for it! If I don’t hear from the winner within a week, I will draw another name. Thank you!

DISCLOSURE (IN ACCORDANCE WITH THE FTC’S 16 CFR, PART 255: “GUIDES CONCERNING THE USE OF ENDORSEMENTS AND TESTIMONIALS IN ADVERTISING”): MANY THANKS TO SIDEDOOR COMMUNICATIONS FOR GIVING ME TWO COPIES OF {WHY} MOTHERHOOD MATTERS IN EXCHANGE FOR MY HONEST OPINION.

0 thoughts on “Would You Wait if an Earthquake Set You Free?”