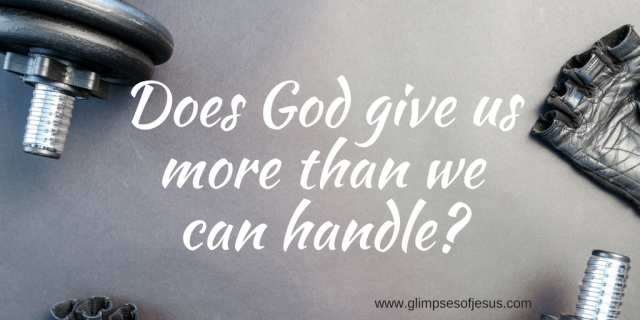 Does God give us more than we can handle?

I used to think the answer to this question was no. I had I Corinthians 10:13 in the back of my mind: “God is faithful. He will not allow the temptation to be more than you can stand. When you are tempted, he will show you a way out so that you can endure.”

Paul talks about in II Corinthians 4:8-9 that he and his fellow believers were “afflicted in every way, but not crushed; perplexed, but not despairing; persecuted, but not forsaken; struck down, but not destroyed.” We can probably gain from this that we won’t be destroyed by our hardships, but that still doesn’t mean we won’t be afflicted with hardships more than we can stand. Some of them may knock us to the ground.

Over the years, I’ve studied the Bible quite a bit. I know the difficulties faced by Moses, Joseph, and Paul, people following God’s will. I believe very strongly in the refining nature of suffering, citing Romans 5:3-5: “we also exult in our tribulations, knowing that tribulation brings about perseverance; and perseverance, proven character; and proven character, hope; and hope does not disappoint, because the love of God has been poured out within our hearts through the Holy Spirit who was given to us.” I’ve gone through very difficult times in the past and after having gone through them and recognizing the closeness of my relationship with Jesus during those times, have prayed for more hard times.

In spite of all that, when I actually hit difficult times, my prayers still mostly revolve around God making it all better. Soon. Right now would be great.

Recently, He pointed this out in me. My daughter Little E has not been doing well emotionally the past few months. I don’t understand why she’s acting the way she is, but it’s obvious she needs help and despite the fact that I’ve tried many routes, I have not been able to help her. On top of that, I homeschool her, so her learning has been negatively affected. I have homeschooled her since she was in preschool; I have spent the past five years doing everything I can to teach her well in light of her unique personality. No one on earth should understand her better than I do, right? So why don’t I?

As I mentioned in my most recent post here, a few weeks ago, I started getting up early to pray. My biggest motivator was to know God more, but another part of the reason I started doing it was to beg God to help me understand and aid Little E. I read testimonies of people praying and God swooping in to make everything better for the family–or at least, that was my take-away. I thought that if I just fasted and prayed really hard, God would fix it all–as if anyone can manipulate God to do what we want, when we want Him to do it.

I started praying. I prayed in the morning and over my children every night. Result? My daughter grew worse.

I could chalk it up to spiritual warfare, and it could very well be that, but God is still sovereign, and I don’t believe anything could get past Him without His ok. If you can’t imagine Him doing that, read Job.

This very difficult time with my daughter is forcing me to get on my knees in prayer, it’s making me learn how to love her better (although I’m far from where I need to be), and it looks like it’s going to bring me to enrolling her in a school. All of it is a huge hit to my pride, a portion of me that has grown too big of late. He’s also been with me, showing up all over the place where I need Him most, strengthening me, dropping encouraging words along the path.

Maybe the continuance of the difficulty is the answer to the prayer.

Mothering my kids well is more than I can handle. Sometimes, or should I say often, God gives us more than we can handle. But if we were only given what we thought we could handle, would we turn to Him? Wouldn’t the temptation be too much to try to rely on ourselves? Maybe the difficulty too hard to handle is a way to keep the temptation to sin from being too much to handle.

What are your struggles? Are you going through a hard time? I would love to pray for you. Comment below with prayer requests or send me an email at heather.bock[at]glimpsesofjesus.com.

Photo by Lukas from Pexels

The winner of my drawing for Passion’s “Whole Heart” cd is Emily Little! I’m excited for you!

Many thanks to Propeller Consulting, LLC for providing this prize for the giveaway.  Choice of winners and opinions are 100% my own and NOT influenced by monetary compensation.  I did receive a sample of the product in exchange for this review and post. Only one entrant per mailing address, per giveaway.  If you have won a prize from our sponsor Propeller /FlyBy Promotions in the last 30 days on the same blog, you are not eligible to win.  Or if you have won the same prize on another blog, you are not eligible to win it again.  Winner is subject to eligibility verification.

0 thoughts on “Does God Give Us More Than We Can Handle?”