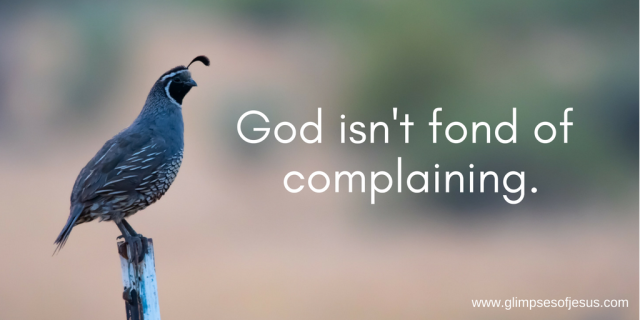 I’m an external processor–you know, one of those people who pretty much has to talk out loud in order to think (preferably to someone else). I don’t know if this is common for external processors, but it makes sense to me that it would be–I also have a problem with complaining. I feel tired? I say it. I’m hungry? I let the person near me know. I’m annoyed at someone? I might hold this one in until I get home, but you can believe that my husband is going to hear it.

The problem is, besides the fact that this is not exactly uplifting for the people closest to me, God isn’t too fond of complaining. Do you remember some of God’s responses to the children of Israel complaining?

Here’s one: “Now the people became like those who complain of adversity in the hearing of the LORD; and when the LORD heard it, His anger was kindled, and the fire of the LORD burned among them and consumed some of the outskirts of the camp” (Num. 11:1). You’d think that might stop the whining, but once Moses had interceded for them and the flames had died down, they were at it again. I wish I could be sure I wouldn’t do the same without the Holy Spirit’s help. Complaining about being sick of manna, they whined for some meat to eat. Let’s stop there a second…sick of manna. They were sick of the miracle bread from heaven that appeared every morning for them to just pick up and cook how they liked. Why do You have to sustain us this way, God? Why can’t You sustain us another way, like the way it used to be when we were slaves?

No, it doesn’t make any sense, but I’m not sure it’s much different when I complain about something not going my way. Isn’t God in charge? It’s like I’m saying, Why did You let this happen? Do You really know what You’re doing? I don’t consciously think that when I gripe, but isn’t the root of complaining a lack of trust or at least a lack of gratitude?

God wasn’t happy with the Israelites’ thanklessness, and His response always makes me laugh (with a bit of fear) because it reminds me so much of an exasperated parent. You want meat? Ok, I’ll give you meat…“You shall eat, not one day, nor two days, nor five days, nor ten days, nor twenty days, but a whole month, until it comes out of your nostrils and becomes loathsome to you; because you have rejected the LORD who is among you” (Num. 11:19-20). You’re going to eat meat until it comes out of your nose! God sent them so many quail to eat that the ground was covered three feet deep with them for one whole day’s journey on either side of their camp. Three feet deep! That would cover up a small child, and we’re talking ten to thirty miles on either side of them, depending on whether the journey refers to an individual’s journey or the whole camp.

Then, as they greedily grabbed the birds and began to gobble up their cravings, God was still angry and sent them a severe deadly plague, killing many people.

God is not pleased with whining.

Am I ever thankful I’ve put my faith in Jesus and am covered by His righteousness. He’s not going to burn me up or send a pestilence down on me after my negative talk. I even have examples of what sounds a lot like complaining in the Psalms (although maybe the attitude is different behind them), making me think that I can go to God with my complaints. He does want us honest before Him. Certainly, it’s better to go to Him with our troubles than inundating my husband or friends.

As a caveat, let me say that I believe there is a difference between sharing our suffering with others, which can even be an honor to our friends who love and desire to support us, and complaining. A heart difference exists between a humble cry for help and a proud, embittered grumble.

Therefore, instead of complaining to other people with the wrong heart, I can start by learning to hold my tongue, praying, “Set a guard, O LORD, over my mouth;
Keep watch over the door of my lip” (Ps. 141:3). I might be an external processor, but I don’t have to externally process everything.

Instead of complaining at all, I can focus on “whatever is true, whatever is honorable, whatever is right, whatever is pure, whatever is lovely, whatever is of good repute, if there is any excellence and if anything worthy of praise,” and I can “dwell on these things” (Phil. 4:8). I can be thankful for all the good without focusing too much on the bad.

Finally, instead of complaining, I can offer grace. Paul David Tripp, in his book Awe, writes about seeing those who get in your way or anger you as opportunities to give grace. After all, “In Him we have redemption through His blood, the forgiveness of our trespasses, according to the riches of His grace which He lavished on us” (Eph. 1:7-8). He has lavished (isn’t that a great word?) grace upon us–what a privilege it is to extend it to others, as well.

I’ve written this blog post to me most of all. I am a long way away from remembering to heed these words carefully, but with God’s grace, hopefully I can learn to spend less time complaining and more time thanking.

Photo by Brett Sayles from Pexels

Last week I held a drawing for the book Confessions of an Adoptive Parent by Mike Berry. Thank you to those of you who participated! The winner is Taylor Phillips! Congratulations! I pray the book will be a blessing to you or someone else you know who might need some hope on the foster/adopt journey.