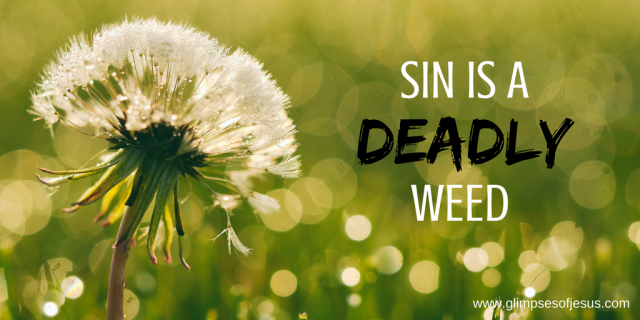 It’s spring, so you know what that means.

Maybe your yard is pristine, devoid of wayward plants, but mine is a mess. Our house was a rental house for many years before we bought it a year and a half ago, and I don’t think the people before us cared too much about the lawn, even though our neighbors care a whole lot. I take my kids out to weed for about thirty minutes a day; we half fill our 32 gallon Rubbermaid every time, but it feels like we’ll be doing this until the unwanted plants die due to the winter cold (something we don’t have down here in Texas) before we make any impact.

We have all varieties: creepers winding themselves in and out of the grass, tall tufts sticking out above the rest, flowering ones of different colors, mock strawberry plants, and flat symmetrical ones that spread wider and wider. I’m tempted to first go after the most obvious weeds, but I remember what happened last year.

Late last spring, the first spring at our new house, when we would walk across the lawn in our bare feet, the undersides of them were stabbed by sharp thorns. When we looked closely, we found this to be the culprit:

What? You can’t see what I’m talking about? Let me zoom in a little closer for you: 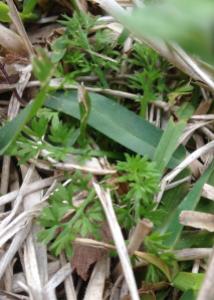 You’d never think something so tiny with such sweet lacy leaves could be so deadly. However, if I let these little guys develop, it won’t be long before we have the same problem as last year. Therefore, I bypass this: 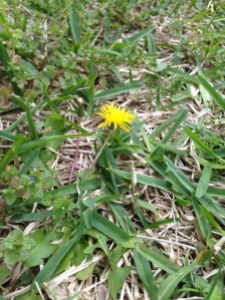 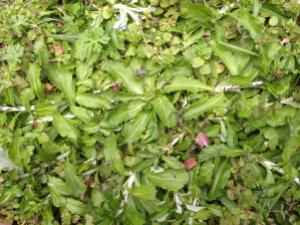 for the ones I know will later cause pain.

When Adam and Eve sinned by choosing to take a bite of that forbidden fruit, God cursed the ground (Ever noticed that God never actually cursed the humans? They were given punishments, but the serpent and the ground took the curses.), saying, “Cursed is the ground because of you; through painful toil you will eat food from it all the days of your life. It will produce thorns and thistles for you, and you will eat the plants of the field” (Gen. 3:17-18). Ever since that day, thorns and thistles in particular and in my mind, weeds in general, have represented sin. Every time I’m outside battling these pests, I compare them to sin. It’s no accident God chose a punishment for sin that would visually remind humanity of what sin can do if we let it. The similarities are striking.

First, we must consider priorities. When confronted with as many weeds as I have in my yard, a gardener has to know where to start. The ones that need to go first are like my tiny, lacy weeds: the ones that will hurt you the most even if they’re not that noticeable to other people. You might be tempted to focus on the big blatant ones first, but they might not be as important.

This might be different for different people, but if you’ve ever read about Jesus going after the sin of the Pharisees, you’ll know that pride (although it can be well hidden) is a deadly sin. It is deadlier than something like habitually eating too much (the sin of gluttony or maybe the sin of turning to the good feelings food can give instead of turning to God), even though the eating will show pretty quickly in your pants size. They both need to be rooted out, but we need to be a lot more serious about the pride. After all, “Pride goes before destruction, a haughty spirit before a fall” (Prov. 16:18).

Second, if we’re not careful, weeds spread, and the weeds that spread to our neighbors’ yards should be the next priority for us. Think of dandelions and their delicate little parachutes borne away by the wind. If our sin is causing others to stumble, leading others into unrighteousness, we need to dig it out quickly. “It would be better for them to be thrown into the sea with a millstone tied around their neck than to cause one of these little ones to stumble” (Lk. 17:2).

For example, gossiping about others can easily encourage others to participate. Even if the person didn’t want to gossip, it takes a certain amount of inner strength to stand up to someone who initiates rumors. It’s also tempting to pass it on. Even if we’re not the ones who originated the talk, we can be the ones to pull out our weeding tool for our own hearts and target that ugly sin.

Sins start as small as a seed.

Once a gardener knows which weeds need to go first, it’s imperative to get them while they’re still small and haven’t developed those thorns or spread their seeds. Sins also start as small as a seed. Like my thorns and dandelions, we’ve got to dig them out as soon as we perceive them. “We are taking every thought captive to the obedience of Christ” (II Cor. 10:5).

I can feel the tiny seeds try to implant themselves into the dirt of my soul. I might come across a beautifully written and illustrated blog post. The seed of blog envy lands. Sometimes it’s easy to blow it away on my own. Sometimes a few slender roots start reaching downwards toward my heart, and I need more prayer. Sometimes the roots go deeper, and I need my prayer and the prayer of my friends. No matter what, though, it must be uprooted, or the deadly thorns will appear.

So many more similarities between weeds and sin flood my mind that I have to write a part two to this post. I hope you’ll come back next Wednesday for more!

Also: I’ve been entered in a writing contest for the book review I posted last week: A Wife’s Secret to Happiness by Jen Weaver. I would be so appreciative if you’d be willing to head to the writing contest here  and vote for me by clicking “like” on my post! Thank you!

Last Wednesday, I started a drawing for a book giveaway for Jen Weaver’s book, A Wife’s Secret to Happiness. I’m excited to say that it’s time to announce the winner! The winner is Sheri Melton! Congratulations, Sheri!

DISCLOSURE (IN ACCORDANCE WITH THE FTC’S 16 CFR, PART 255: “GUIDES CONCERNING THE USE OF ENDORSEMENTS AND TESTIMONIALS IN ADVERTISING”): MANY THANKS TO THE BLOGABOUT NETWORK FOR GIVING ME TWO COPIES OF A WIFE’S SECRET TO HAPPINESS IN EXCHANGE FOR MY HONEST OPINION.

0 thoughts on “The Many Ways Sin is Like a Deadly Weed: Part One”