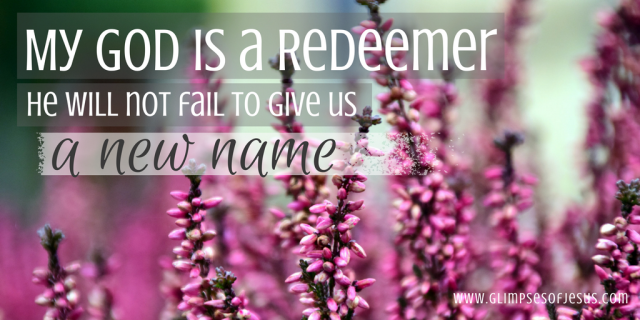 Little E wants us to call her by a new name–well, not exactly new–she wants us to call her by her real name, not by her shortened name. People, not thinking about the effect, have made fun of her name too many times. As a result, she wants to switch to her full, unique, untainted given name. Her shortened name has become an object of ridicule in her mind; her full name is one of dignity. I’ve been calling her by her shortened name for seven and a half years, so it’s not easy to make the change, let me tell you. I’m willing to do it, though, because a name is vital.

Your name is who you are. It is tied to your identity.

I can’t help but think of Johnny Cash’s song, “A Boy Named Sue.” If you haven’t heard it, you’ve got to listen to it here. In the song, a boy was named Sue. His father had left the family when Sue was young, and he resented the dad his whole life for giving him a girl’s name. At the end of the song, Sue finally meets his father, when he learns the reason for the name was to make him tough since he wouldn’t be there to raise him. Yes, Sue’s name made him who he was, but just like Little E, he still would have changed it if he could have–he said he’d name his son any boy name, just as long as it wasn’t Sue.

God renamed some of His children. God changed the name of Abram, which meant “exalted father” to Abraham–“father of a multitude” (Gen. 17:5). Abram already had a name of honor, but God wanted to remind him the rest of his days that He would fulfill His promise to him, a promise to make him a father of many nations.

At the same time that God changed Abram’s name, He changed his wife Sarai’s name, a change that had the same meaning as Abram’s. Her name meant “my princess,” and God changed it to Sarah, “princess.” At first, she was only the princess of her family, but afterwards, she would be become the princess of a multitude. Whenever she was tempted to laugh at the idea of many descendants coming from her tired-out body, Abraham only had to call her name, and she could remember the promise that would be fulfilled.

It probably took a while for Abram and Sarai to remember each other’s new names, just as it’s hard for us to remember what Little E wants to be called. During that awkward transition, both were forced to remember again and again the reason for the change, cementing it into their minds.

Heading into the New Testament, we find Simon, a name that means “he has heard,” whom Jesus renamed “Peter,” which means, “a rock,” and upon that rock Jesus said He would build His church (Matt. 16:18). Simon is special because throughout the gospels, Simon is often called Simon Peter. He was able to keep the positive name of “one who has heard.” After all, didn’t he hear and listen to the voice of God Himself? However, he also received a new name affirming his full identity, even when he didn’t always act like a rock. Remember his triple denial? Jesus knew he’d turn back, and I love how He predicted the denials in Luke 22:34, using the name Peter while He said it. He affirmed him even while he predicted his failure.

Several years ago, I looked into the meaning of my own name. I knew I was named after a flower, but I don’t have much experience with heather, as I don’t live near the moors of Scotland. I was always under the impression that the heather flower wasn’t of much value.

It turned out to be more valuable than I thought. It’s beautiful because it covers barren places with color. It’s a sweet-smelling plant, used as an aromatic. It’s a hardy plant, one with much endurance, thriving in many soil types, in wet and dry conditions, and in high and low temperatures. It’s a prolific plant, covering large areas and sending out an abundance of seeds. It’s a useful plant, providing shelter for birds and other small animals; food for grazing animals; medicine for many ailments; color for dyes; flavor for drinks; and strong wood for houses, long-lasting roofs, brooms, ladders, and much more.

I can only hope I will live up to the honor my name bestows me. I hope my spirit under God’s care will grow to be beautiful, that my prayers will rise as a sweet incense before God. I hope I will prove to endure in my faith in all conditions throughout my life. I hope I will spread seeds of life far and wide, both in my everyday living and through this blog. I long to be useful–I have often prayed that God would use me.

You might not have a name with a meaning you love, but did you realize that you have a new name prepared for you? Jesus says in Revelation 2:17, “To him who overcomes, to him I will give…a new name written on the stone which no one knows but he who receives it.” He gives us names full of beauty, restoration, and life. Instead of “Not My People,” we will be called “Sons of the Living God” (Hos. 1:9-10).

If God has clearly given you a new name, will you share it in the comments below?

0 thoughts on “In His Redemption, God Gives Us a New Name”