What’s funny is that JP hasn’t even watched Ninja Turtles for a long time, as we don’t have Hulu, the place where you can find the show he likes. However, his sister gave him a month of Hulu for his birthday (well, we actually paid for it), so he does get to watch it occasionally now.

If you like to create your own cheap parties and want to get ideas, hopefully this post will be helpful for you!

Of course, every party starts with an invitation. I found my idea for these invitations here, but as I’m not an artist, I needed some help. I printed a Turtle coloring page, cut out the face, then traced it on green cardstock. Next, I cut out the mask, traced it on colored cardstock, cut it out, and glued it on the green face. I used this same method for the eyes and tongue. I even traced the mouth, but then I just used a black sharpie to color it in. I had printed the invitation messages on label paper inside circles, so after cutting them out, it was easy to stick them on the back. I used the free Turtles and Cowabunga fonts to make it. It took me about two hours to complete 12 invitations–I worked on them in the car (while my husband drove) on the way to my in-laws’ house. Might as well do something with that time!

Here are my decorations (I did have a name on those plates in the banner). I got the idea and the print-out for the Ninja Turtle plates here. JP liked them, so they ended up on his bedroom wall after the party.

I thought this was a fun decoration. We were down in the sewer, of course, since we were Ninja Turtles, so I wanted a ladder up to a manhole! I made the ladder out of duct tape taped together, so it was smooth on both sides. The manhole was just cardboard cut out in a circle, covered with duct tape, and decorated with a black sharpie. At first it looked like a button, but I hope I changed it enough so it didn’t anymore!

This was not meant to be a decoration for this party. I made it for my oldest son’s knight party back in February, and he liked it, so I’ve kept it outside his door ever since. It’s also made with duct tape. However, I realized it kind of looks like something you might find in a sewer! 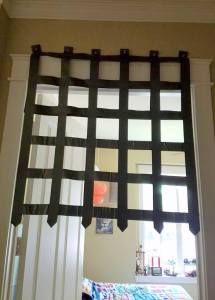 Streamers are old-fashioned, but my kids don’t think the house is decorated for a party without them.

I thought we should have some slime decorations since we were in the sewer, so my sweet husband drew me some slime blobs on green paper, and I cut them out while we watched a movie one night.

I don’t like to buy helium balloons, so I just taped these guys up as decorations (idea here). Their masks were streamers and paper eyes I had taped on. After I made these, I couldn’t stop giggling about how disappointed Raphael looked to be next to Leonardo. Michelangelo was supposed to look fierce, but ended up just looking scared–I think Donatello is laughing at him.

We welcomed the guests with their party gifts/costumes:

First, they could get their fingers, wrists, and ankles wrapped with paper tape just like the turtle warriors do, and take their favorite mask: 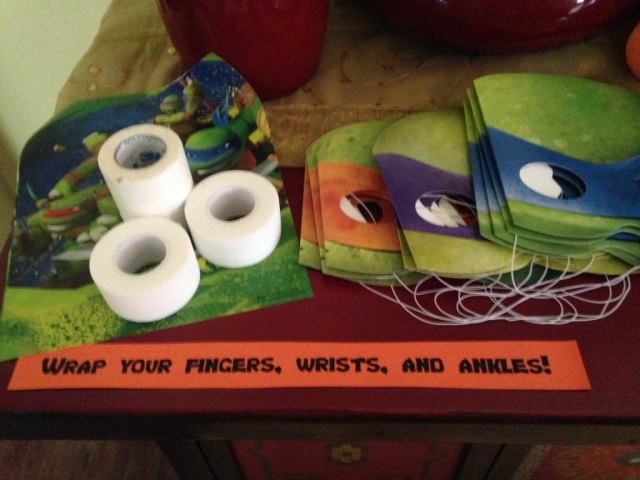 Next, they were to grab a pool noodle nunchuck (directions for these here): 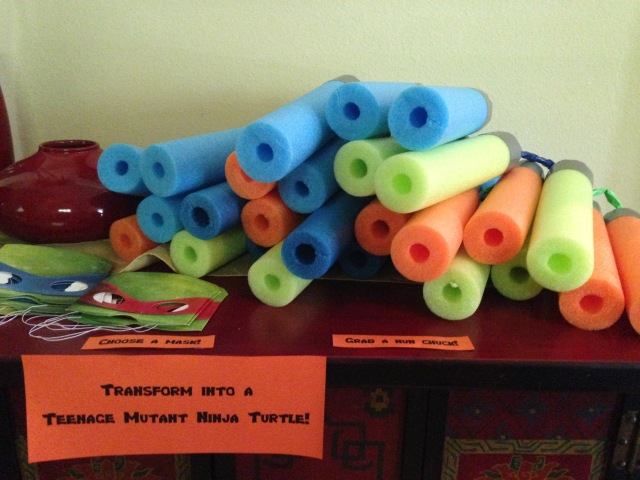 Then slip on a turtle shell: a green spray-painted foil roaster with string straps (decorations and idea here): 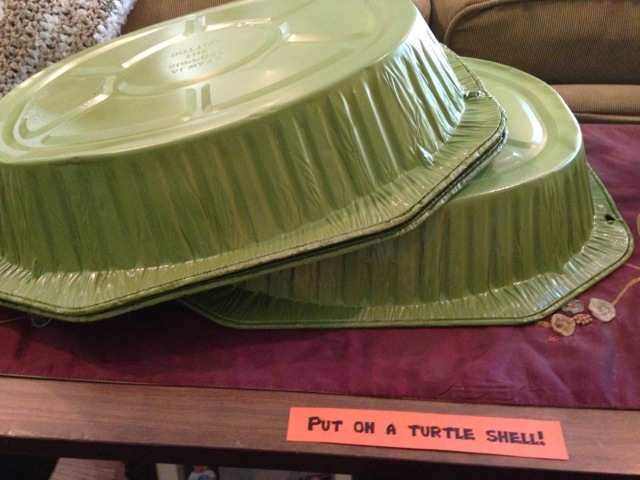 Then the kids could color some Teenage Mutant Ninja Turtle coloring pages while they waited for more guests to arrive:

Once more of the guests did arrive, we headed outside for a few games. First, we played toss the stuffed turtle into the (clean) garbage can. I told them the Ninja Turtles sometimes ended up stuffed in garbage cans when fighting with their enemies. Here they are lined up to toss:

Next, we played Splinter Says. Whoever held the “staff” was Splinter and told the other kids what to do.

After that, we played a sneaky ninja game, kind of like “Red Light, Green Light,” except that they could go when my back was turned to them. When I heard any sounds, I would turn around quickly. If I saw any of them move, they had to go back to the beginning. We played this game at my oldest son’s Ninjago party several years ago, along with other ninja games. I wanted to play a game where we would tape streamers to the kids’ turtle shells, and they would have to run around trying to pull the streamers off of each other, but it was way too hot. By this point, all the kids wanted to go inside.

So, instead, we played “Knock Out Shredder,” an idea I got here but changed a little. With packing tape, I taped the cups on the big cardboard boxes I used instead of cutting out holes for each one, and I arranged them in a shape reminiscent of the Turtles’ nemesis Shredder. A few did droop some, but it worked pretty well. I also used foil for the look, and the foil would come away on their fist, so it was kind of fun that way. I filled the cups with candy and stickers, which they put in treat bags I had given them.

While they were waiting in line to punch Shredder, I had the back of the line play another game (idea here). Lollipops were hidden with the shredded paper, and the kids had to dig around in it with their eyes closed until they found one–another item for their treat bags. I tried using pennies, but they all fell right to the bottom of the box. This was a two-fer because I was able to prepare for the party and get my chore of shredding papers done at the same time!

One last game I had was to stack “sewer lids”–Oreos. They each took a turn trying to stack as many as they could and see who could stack the most. I think 13 was the highest number. When we were done, they put Oreos in their treat bag to take home.

Finally, it was time for snacks!

I can’t believe I forgot to serve the pizza bagel bites we had bought (Ninja Turtles’ favorite food), but we did have Ninja cookies (not that great, by the way–I wouldn’t recommend them, even though they were cute), pretzel nunchucks (idea here)…

Michelangelo broccoli, carrots, and black olives. The eyes were the same mini applesauce cups, this time filled with ranch and that one black olive slice (idea here): 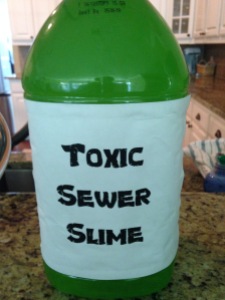 The cups (idea here) were easy to make with crepe paper, googly eyes, and hot glue:

JP did not want a cake. He wanted donuts, so I called Dunkin’ Donuts and requested green, red, and orange donuts and a few donut holes, and I just arranged them into the shape of a turtle’s head. You can almost see Michelangelo’s face if you squint:

After we sang happy birthday, enjoyed our snacks, and JP opened his presents, the party was over, but I hope the kids continued to enjoy their Ninja Turtle costumes after they went home!