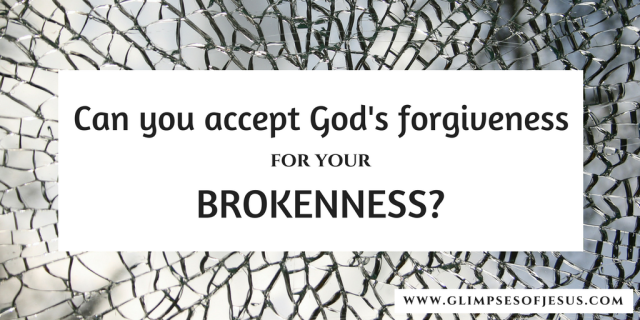 Last night, as I tucked my boys in bed, JP was focused on the planets hanging from the ceiling. He wanted to know which planets had people on them, which were hot, which were icy, and on and on. My daughter was waiting for me to tuck her in, supposedly in her room, and I wasn’t making very fast progress. Suddenly, we heard a loud shattering crash right outside the bedroom door, followed by silence. I opened the door quickly, being careful not to let the cat run out over the broken glass around the bare feet of my daughter who stood frozen in front of the door. The candle wall sconce was lying on the hardwood floor.

I didn’t have too much anger in my voice–more perplexity. After telling her to stay perfectly still until Daddy could come with shoes and carry her to her room, I asked, “What happened? Why are you here and not in bed? How did this fall?” She had no words for me, only a loud, remorseful wail. After Greg put her in her bed and as he proceeded to clean up the pieces of glass, she continued to cry. JP was undeterred. He wanted to know more about the planets, but he was hard to hear over the bawling coming from the room down the hall. After I heard my sons’ prayers, I finally made it to Little E’s room, tiptoeing over the remaining glass.

She lay there, still sniffling, sullen on her pillow. I could see she felt bad for what she had done, so I told her she was forgiven for getting out of her bed and breaking the wall decoration, but her mood didn’t remotely lift. She still felt bad. She didn’t want me to leave, but she didn’t want to talk to me. She wanted me to listen to her prayer, but she was so mad at herself, she could only barely grunt out the familiar words, “Thank You for this day, and thank You for this world…”

I said, “E, God doesn’t want you to tell Him you’re thankful when you’re not. He wants you to talk to Him like you would talk to your friend. If you feel bad, you should tell Him that. What if you went up to your friend Edy Rose and grumped at her, ‘Thank you.’? She would wonder what’s wrong with you!” After a good twenty minutes of huffing (during which I walked away for a while), Little E finally told God she felt bad and said sorry to Him. I told her that God does forgive her when she asks. Then it took another fifteen minutes or so of me holding her agitated form and loving on her before I gave her just the right amount of kisses on her cheek, and she broke into a giggle. It wasn’t long then before I could leave her to go to sleep in peace.

I told Little E several times she was forgiven by me and by God, but it took her a long time to believe it. I started to realize that I can be that way, too.

David says in Psalm 103:2-3; 12, “Bless the LORD, O my soul, And forget none of His benefits; Who pardons all your iniquities, Who heals all your diseases…As far as the east is from the west, So far has He removed our transgressions from us.”

John says in I John 1:9, “If we confess our sins, He is faithful and righteous to forgive us our sins and to cleanse us from all unrighteousness.”

Paul writes in Ephesians 1:7, “In Him we have redemption through His blood, the forgiveness of our trespasses, according to the riches of His grace.”

God is full of grace, ready to forgive when we repent–the very reason Jonah ran away when he was called to preach repentance to the Ninevites. He was angry at God when He showed this compassion to the very people Jonah hated.

Why don’t I always trust in His forgiveness? Why do I sometimes wallow in how bad I feel over something I’ve done wrong, just like my seven year old? At times, I let it go right away, but other times I want to punish myself first, do some penance.

The beauty is that when I act like that, my good Father does what He gave me the grace to do for my girl: holds me, comforts me, and assures me that He loves me until I believe Him.

0 thoughts on “Can You Accept God’s Forgiveness for Your Brokenness?”