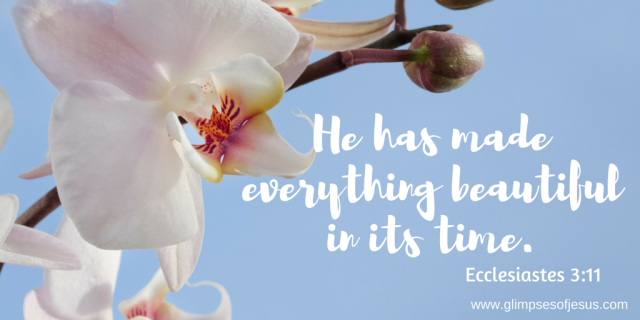 Last December, my orchid plant started sending out a flower shoot. It had been a particularly warm December, and my poor plant was confused. It figured, sitting day after day in the warm sunlight of my balmy sunroom, that spring had arrived. As it hadn’t been a year since it had bloomed the spring before, I was certainly surprised, watching it and wondering if it were going to be a twice-a-year blooming orchid now.

The weather changed, as I’m learning it always does in East Texas. After all, the motto in these parts is if you don’t like the weather here, just wait a week. We pulled our winter coats back out and lit a few more fires. The growth of the orchid shoot that took a month and a half in the past stretched to almost four months. The suspense was killing me.

Finally, one bud was fully formed with the rest on the way. Then, on Easter morning, the day we celebrate Jesus coming to life, I woke to find that the first bud had come fully to life, popping open and spreading wide by the end of the day.

Another person would look at that and shrug, thinking, Yeah, that’s sort of an interesting coincidence, but so what? It meant a lot to me, though. You see, my God knows me intimately, and He is fully aware, not only how much I love orchids (particularly my own orchid when it blooms after months of weekly, careful watering), but by how thrilled I am by symbols. After all, I wrote a Bible study all about finding symbols of Jesus in Genesis.

That orchid was a gift to me–a vivid reminder of the life Jesus brings–a future life after the grave and new life springing open after a time of slow growth here on Earth. That orchid could be a symbol of my own life right now–something new flowering out of plain green–for He has been making new grow in me lately.

I could stop right here. Isn’t that enough, that the God that created the glorious, almost unfathomable universe with stars so much bigger than our own sun (so big itself that the earth we live in is the head of a pin next to it) that if the sun were a basketball, the biggest star we’ve found so far would be 3 miles in diameter, that God, cares enough about someone as small as me as to make sure a favorite flower blooms on just the right day?? Isn’t it enough that He confirmed in me that He’s creating new beauty in my heart?

That orchid bloom started its long journey upwards in the middle of winter. It didn’t seem like it was ever going to reach fruition, as it took ever so long to form even the first faint start of a bud. However, it couldn’t have popped open on just the right day in Spring, on Easter itself, if it hadn’t started that long before.

What is God preparing in you? What is growing up millimeter by half millimeter? What are you waiting to watch bloom? The patience it takes to watch can feel excruciating at times. I’ve been there. I’ve waited to see God help me grow in areas I wanted fixed immediately. In fact, I’m in a waiting period right now in a few areas. Will that Bible study I mentioned ever be published? Will my family ever be at the point when adoption of another God-given child is finalized?

This orchid serves as a reminder that God’s timing is perfect. He knows exactly the right day and moment we need that for which we wait. We can believe that it will be worth the wait, for His timing is not only perfect, it’s beautiful.

“The LORD is good to those who wait for Him,

To the person who seeks Him.”