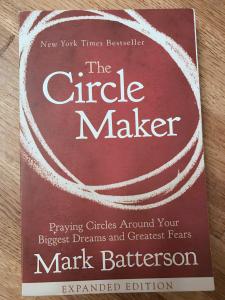 When I first started reading The Circle Maker by Mark Batterson, I was taken aback. In fact, my mind filled with doubt.

Batterson begins with a chapter called “The Legend of the Circle Maker,” which is a story in the Talmud also recounted by Josephus, the ancient historian, about a man named Honi who lived in the first century BC. The tale goes that rain had not fallen for more than a year, and Honi decided to intercede by drawing a circle in the dusty dirt around him. After he finished, he swore to God that he would not move from the circle until God showed mercy to His people by sending rain. It began to sprinkle. Honi, not satisfied, prayed that God would send a heavy rain. It poured so heavily, the ground began to flood dangerously. Finally, Honi prayed that it would rain in a way to show God’s favor, after which the rain began to fall peacefully.

Why does this story make me uncomfortable? It does for the same reason some of the Sanhedrin at the time gave: Honi’s behavior, although apparently honored by God, seems to dishonor God.

Batterson goes on to say that he has also circled prayer requests, often by literally walking around them and praying. Some of his prayers were answered in mighty ways. His testimony of dramatic answered prayers inspired me and magnified God’s power and love.

However, the prayers Batterson describes through the book don’t have the same feel as Honi’s prayers. Honi swears that he will not stir from his circle unless God sends rain. I’ve heard of bold prayers, but that sounds a lot like blackmail to me, kind of like a child who willfully pouts, “I’m going to hold my breath until you give me what I want!”

However, if the Talmud can be trusted, as Josephus the historian thought it could, God answered that prayer.

I truly don’t believe God wants us to try to manipulate Him, so the only conclusion I can reach is that if this history is true, Honi had a good heart behind his petulant-sounding words. I think he must have been throwing himself at God’s mercy, trusting Him to come through for His chosen people, believing Him to be a capable, loving God. This attitude is the one I found in the remainder of The Circle Maker.

Batterson emphasizes the power of God to answer our prayers and that we often pray small prayers because we don’t believe He’s able to answer our big ones. Batterson asserts that God may not be willing to grant us what we wish, maybe for our good or our wrong motives, but we should nevertheless pray bold prayers with passion and keep praying them consistently unless God tells us otherwise because we don’t know whether He will say yes or no. We also can’t know when God will answer our prayers because we don’t understand God’s perfect timing. He writes, “Circle makers know that it’s always too soon to quit praying because you never know when the wall is about to fall. You are always only one prayer away from a miracle” (p. 36).

I have no problem praying for the same request for a long time. I take that story of the widow and the judge in Luke 18 to heart. “Will not God bring about justice for His elect who cry to Him day and night, and will He delay long over them?” (Lk. 18:7). Sometimes my prayers are accompanied by tears, and often they are not, but I keep coming to Him with the same requests that haven’t been answered because they are important to me, and it seems I’m asking for what is important to Him as well: salvation of family members, loving behavior from my children, and more of a closeness with Him. I have no idea if all of my requests are in line with His will, but I don’t stop praying for those that are deeply meaningful to me.

However, I needed the reminder from this book to pray boldly–to remember that God is bigger than I can imagine, and that I can ask Him for miracles. He might say no, but what if He says yes? Why not ask, as long as I’m asking in humility and faith in His ability? When I ask for something impossible in my eyes, I  honor Him by acknowledging that with Him, nothing is impossible.

The Circle Maker showed me areas where my faith was deficient in prayer, encouraged me in some of what I was already doing, forced me to think more deeply about my prayer walk, and inspired me to pray in some new ways, ways that brought me closer to God.

0 thoughts on “The Circle Maker by Mark Batterson Book Review”